Reptilians - Do They Exist and How They Influenced My Writing 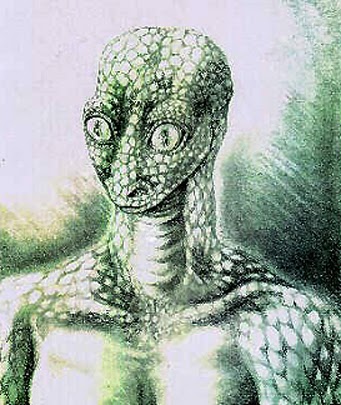 I've always been fascinated by conspiracy theories. Years ago I ran, while researching ancient mysteries, I ran across a website run by David Icke. My first instinct was to roll on the floor laughing. Now, I'm not saying I believe any of it but you have to admit: it's pretty interesting fodder for a writer.

The reptilians are supposed to be a race of shapeshifters who live at the center of the earth. Originally they came from the an alien star system, either the Draco, Orion, or Sirius system depending on whom you ask. They interbreed with humans to create a half-reptilian who have infiltrated every level of government, every religion, and every power structure on the planet. They are devil-worshipers, vampires, baby-eaters and, according to some, incredible lovers. Ick.

David Icke has written several books on them. And he's not alone. As for hard, physical proof they exist, there is none. There are many witness reports, each one more mindblowing than the next. A quick search on youtube provides a plethora of 'video evidence'. Much of it is laughable. A few may be the sign of serious mental health problems. But not all of them.

Many say David Icke is insane. I disagree. I've read a few of his books. If anything I would question his lack of objectivity. He's so far down the rabbit hole that he can no longer, in the the words of my father, 'tell shit from shinola'. But try to see things from his point of view. If you have that many people come to you, people who do not know each other, all repeating slight variations on the same story, wouldn't you be tempted to think there was something to their story.

He's been  accused of being antisemitic. This does not appear to be true. His words have been taken out of context, skewed, all in an effort to discredit him. There's really no need. If you want to attack him, focus on his academic credibility. For example, in a chapter on the importance of not believing everything you read, he quotes Hitler. The best part about it, the quote is actually from Richard Beltzer, a Jewish comedian. This is either incredibly ironic or he's crazy like a fox. Think about it. If there really is a race of shapeshifting lizards who control the world, would they let anyone who knew their secret live? Perhaps the only reason Icke is alive is because no one takes him seriously. Well, no one they deem important.

Is There Any Truth To It?

Who knows. I've never seen one but I've seen enough weird stuff in life to realize that anything's possible. I've seen ghosts, UFOs and even the entities people call the Grays. I rarely speak about any of that stuff because I know it sounds crazy. I honestly don't give two swift you-know-whats if people believe me. I know if I was in their shoes, if I hadn't seen the things I'd seen, I wouldn't believe me either.

Even after everything I've seen, I like to think of myself as a skeptic. When I hear anyone use the term Annunaki or reptilians, my instinct is to roll my eyes and take a step back. Okay, maybe a few steps back. Most people I've met that talk about ancient aliens and global overlords probably belong in a padded room somewhere. Just because a few people agree on a "fact" doesn't make it real.

But just because you haven't experienced it doesn't meant it's not real.

How I Used Them in my Writing

In my novels, the reptilians are a race known as the edimmu. I've kept some elements of the mythos - shapeshifting abilities, live underground - but they are not part of the illuminati. Instead, they've been enslaved by the Orpheans, a race of shadowy beings imprisoned in a pocket dimension who torture humans and want to take over the planet. They are natives of Earth. In biblical times they were know as the Watchers. They taught humans advanced mathematics, the secrets of agriculture, any many other things. But their days of helping humans is long over. Now, they are something else.