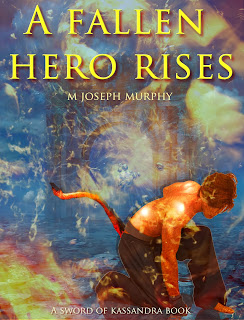 I'm excited to finally share with you the cover of my upcoming novel, A Fallen Hero Rises. It's been out to beta readers since September. I'm sending it off for a final proofread later this month with a scheduled publication date of late December, early January.

I created the cover myself. The stock photos purchased come from Fotalia and Pixabay.

Synopsis: Tadgh Dooley wakes up on the planet Maghe Sihre with no memory of how he got there. He’s wounded, near death, in the care of a monastic group called the Brotherhood of Tyche. But he has more than that to worry about. The way he came to Maghe Sihre created a crack in an interdimensional prison called the Void. And something fell out of the Void: a powerful artifact called The Sword of Kassandra.

Tadgh is also more powerful than he suspects. He is fod sel-onde, born with the ability to warp the fabric of reality.  Every time he uses his ability, the Void cracks open further.  If it cracks too much, the prisoners will slip out.  The results could be catastrophic.

Can Tadgh gain control over his power before it's too late? And what does the appearance of the Sword of Kassandra mean for the people of Maghe Sihre?
Posted by Unknown at 3:16 PM 1 comment: