4 Fun Facts About Atlantis and Why What You Think is Wrong.

I've always been fascinated with Atlantis, so much so that I made the protagonist of my series, Wisdom, survivor of the lost city. There is much misinformation spread about Atlantis. As you'll see below, most of what the average person believes is not true.


1. Plato is not the only ancient writer to mention Atlantis

Plato's famous dialogue in Atlantis dates to around 350 B.C.
However, it is not the first mention of Atlantis in recorded history. Herodotus, ancient historian means the Atlantis ocean, rather than the Atlantic Ocean as we refer to it today.

"Herodotus could have chosen the adjectival inflection, atlantikos ("Atlantic"), meaning "of Atlas," in which case could be construed to refer to Mt. Atlas in Morocco; however he did not do so. Furthermore, I know of no major body of water named after a mountain." Source: Atlantis Quest

We also have Hellanicus of Lesbos (490-410 B.C.) mentioning a kingdom called Atlantis founded by Poseidon and ruled by Atlas, a son of Poseidon. If nothing else, this shows that Plato did not invent the name Atlantis.

Now a quick word about the "son of Poseidon." This may not mean he was a physical son. It's quite possible it is used in the same context as the saying "child of Christ" that we use today. If we say someone is a child of Christ, it simply means they are a devoted follower of Christ. Anyone claiming to be a real son or daughter of Christ would be seen as a looney. We'd think the same thing as someone claiming to be a son of Poseidon. 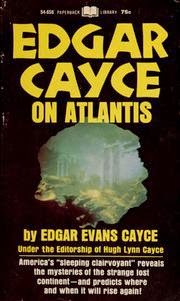 Much of modern, "new age" beliefs about Atlantis come from Edgar Cayce. Perhaps the most famous american psychic of all time, Cayce is known as the "sleeping prophet". He would enter a trance and give readings to others. According to his son, Cayce gave over 14,500 readings in his life. Of those, 700 related to Atlantis. Source:  Edgar Cayce, The Sleeping Prophet, On Atlantis from source: The Hieronimus & Co Newsletter

Cayce claimed Atlantis was a very old land mass: over 200,000 years old. There was a series of three destructive events, not a single earthquake, that eventually sank the island. He claimed the island was very advanced technologically and had something similar to atomic power.

Contrary to what many people think,  Atlantis was not a single city. It was a continent. Legend says it you could see it from the Straights of Gibraltar as well as the coast of what is now Newfoundland, Canada. To the north, it was short journey to Great Britain. In the south, sections reached the Bahamas. Plato said the island was as large as Libya and Asia combined. To give you some context, here's a map of the ancient from the ancient world.

4. There is a Hole in Our History

The world is filled with artifacts and locations our current ideas of history cannot explain. But they make perfect sense if Atlantis was real. Some suggest there was an ancient, global civilization with access to air travel and intercontinental trade. Sound ludicrous? Well explain any of the following:

1. Ancient Hieroglyphics in Australia
2. Stegosaurus Depicted at Angor Wat dates to 12th Century. We "discovered" it in 1877
3. Map from 1500s shows Antartica. We "discovered" it 1840
4. Vimana - flying machines mentions in Vedic texts from 16,000 B.C
5. Nasca lines in Peru that can only be seen from the air

Of course you could discount a few of these. But take 10 minutes and Google ancient mysteries. There are too many things that don't add up.

The Lost City of Altantis: The Facts