Review - Skyfall (A Lesson for Writers) 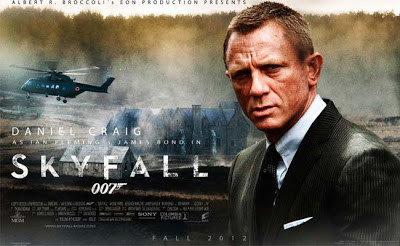 
The action sequences are stunning and as much fun as you expect from a James Bond movie.  The actors perform with excellence. Daniel Craig delivers a complex, fully realized character and not just an archetype. His Bond has a very real-world focus making the movie more believable. Judi Dench is an amazing pitbull, a woman willing to make the tough calls without sacrificing her humanity. In many ways, this is M’s movie as much as it is Bond’s. There are even rumors she may get an Academy Award nomination for her performance

There is even an attempt at symbolism and subtext: the struggle between the old guard and the new guard. So I enjoyed the writing too….for the most part.

My biggest problem with the movie was the villain. Javier Bardem does an excellent job as an actor so I can’t put the blame on him. The weak link here is motivation. Without spoiling anything you couldn’t figure out from a plot synopsis, Bardem’s character (Silva) has a grudge against M. I’ll let you watch the movie to find out why.  I can see why he wants her dead. It’s just not believable that he would spend the amount of time and resources shown in the movie to kill her.

It doesn’t make sense. It doesn’t feel real. Which means the writers didn’t do their job properly.

I’m not saying we need a Dr. Evil type villain for the movie. World domination is completely unrealistic. And boring. But he could have killed M or made her suffer in far more effective ways than he does in the movie. Seriously, if he is the type of man he is purported to be, there is no way he would go through all this trouble just to get to M.

There is a saying: a hero is only as good as his villain. Craig is my favourite Bond. I know that will immediately get me dozens of haters but it’s the truth. However, Silva is the weakest of the villains of the recent movies because his motivation so unclear.

So where’s the lesson for writers: do not write the villains as if they are the bad guy. Remember that every person is the hero in their own story.  Make the villain's journey as believable as the hero’s journey. And if you want them to be seen as scary, actually have them DO scary things. Don’t just talk about how scary they are. The scariest thing Silva does is shoot someone who has betrayed him. This does not make him the scariest man in the world. It makes him a thug.

Lesson: Up the game for your villains and give them believable motivation