This is the first line of the short story that starts Books of Blood. It's been about 25 years since I read it for the first time and it still creeps me out.

It implies a complexity to the unseen world that is unsettling. It's uncomfortable to think that we don't really understand out world. The only way most of us can make it through the day is because of a self-imposed illusion of predictability. Order.

Highways bound the Roman Empire together. If we lost our cars and our planes and our fancy interstate connections, how long would it be before we settled back into barbarism?

I've seen ghosts. Often. They don't scare me though. Not outside of stories. To me, they've always seem like sad little echoes that do not have the good decency to fade with time. They just seem to pop up some times. Like farts. Inconvenient, embarrassing and troublesome but hardly dangerous.

But what if I'm wrong? What if the world I live in isn't really the world I think it is.
That's what this short story does. It quickly and subtly crafts a world that is not in the least chaotic. It has a certain order to it...its just not an order we are able to understand.

But Barker took his time with these words. He craft them. You can feel the weight of his patient choices with each sentence. Polished. Pristine in form as a counterbalance to horrendous imagery. 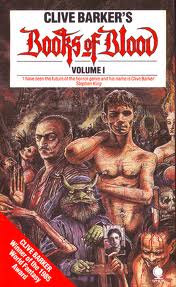