Review: Don't be a Hero by Chris Strange 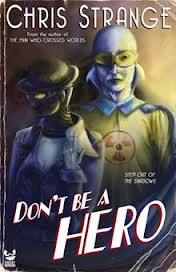 Don't be a Hero is by far the best book I've read in years. And I read a lot of books: independent and the big houses.  The last time I was this impressed was Jim Butcher's  Furies of Calderon.

It will draw obvious comparisons between The Watchmen and the television series Heroes. Both show superheroes as "realistic" and "gritty". This is "realistic"; it is serious. Chris treats heroes flying around in spandex or throwing trees around as accepted reality and just tells a great story. The current trend to take the "super" out of superheroes is often works (e.g. The Dark Knight, the television show Arrow, etc.) but it is not what drew me to comics.

This is the book comic fans have been waiting for. It is everything this comic book geek could ever want in a novel.

Storyline:
It is the late 1960s in a world where superheroes are real. But the time of heroes has passed. They were loved by the public during World War II. Once the war ended, they were seen as a threat.

Two former heroes, Niobe and Solomon, work as freelance investigators. Unfortunately for them, they stumble upon the career of a life time...a case upon which the fate of the whole planet depends. All the characters have a very solid arc. Often, this type of book has a glaring cliff hanger begging for a sequel. And while there could be one, there doesn't NEED to be one.

Characters:
Niobe is a joy. She is flawed and heroic with moments of fragility and strength. The same can be said for the main villain. He never sees himself as a bad guy. He is rational, sane and very, very human. And, in some ways, I wanted to him to win. That is the sign of a well-written villain.

Worldbuilding:
A very simple device helps build a fully realized and believable world. Each chapter begins with an excerpt from a government file or document that helps establish the past. Chris never wastes your time with needless exposition. Yet you feel as if you know a ton about this world.

Plotting and Pacing:
There is nothing ground breaking about the plot line. Chris Strange uses very familiar comic book tropes. He revels in it. The book is never easy to put down. Every chapter ends at a point that makes you want to keep reading.


Conclusion:
I was given this book for free to review it. After reading it, I went out and paid for it. I also picked up his other novel, The Man Who Crossed Worlds. Do yourself a favour. Buy this book and tell your friends about it. Truly, an excellent book.

You can read the first chapter here on Chris' website: Don't Be a Hero Sneak Peak