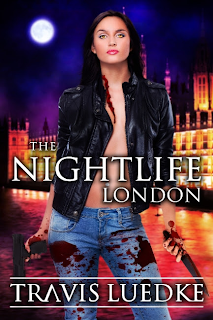 I actually finished this book days ago but I couldn't bring myself to make the update on Goodreads. Why? Because this book is so awesome and I'm afraid any review I can give it will not do it justice.

Vampires Aaron and Michelle prowl the dark, gritty, strip clubs and back alleys of London on the hunt for Michael Jamison, the man who stole Michelle's blood and left her for dead. To assist them, Aaron’s new master, Urvashi, calls in favors from her friends, Russian mercenary werewolves.

Wolves Katya and Ivan, hunters adept at killing rogue vampires, set aside their animosity for Aaron and Michelle to stop Jamison from murdering another woman – he already has one bloodless victim lying in the morgue.

Jamison, ex-special forces, feels his enemies closing in, but he won’t go down without a fight – and like Aaron and Michelle, he also has powerful friends.

Experience the violent, sensual underbelly of Nightlife London, as Aaron and Michelle mix up a wicked blend of sex, chaos, mayhem, and vengeance.

What you have here is a tight, well-pace adventure that does not slow down for a second. I probably could have read the whole book in one setting but I purposefully spread it out because I wanted to enjoy it. Unless Travis can clone himself, it will be some time before the next installment. I am greedy for these characters. The more Luedke reveals about the characters, the more I want. With each book in the series, the world becomes larger and scarier.

The sex scenes in Nightlife London are off the charts. Stay in doors to read this. You may need to run to the shower to cool down.

Not enough. Never enough. I could have read another 100 pages with pleasure. However, Luedke focuses on strengthening the plot and pacing rather than giving us a big book. Which really isn't so bad after all.

I am officially in love with this series. Do yourself a favor and get in on the action