By now you're heard that Jupiter Ascending did not do well at the box office. But does that automatically mean it's bad? Many movies now considered cult classics bombed at the box office. (Link: 11 Classic Movies That Were Box Office Bombs) My gut tells me, no matter what it's Rotten Tomato score, this is a movie we will be talking about for years.

When I left the movie I wanted to know if others had sensed a connection between Jupiter Ascending and Brazil. So I Googled "Jupiter Ascending Brazil" and learned that the one and only Terry Gilliam made a small but significant cameo in the film. 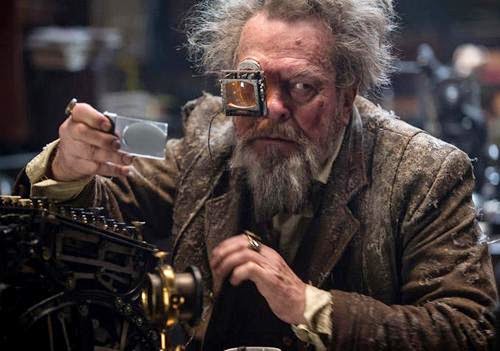 However, in Brazil it's a bit creepier. Sam Lowry, the main character of Brazil, has daydreams about saving a beautiful redhead, Jill. At the end of the movie, his mother (played by the amazing Katherine Helmond has plastic surgery which makes her look exactly like Jill. Freud would have a field day. The viewer is left to wonder if Jill ever really existed or if she was simply a projection of Lowry's Oedipal feelings about his mother.

Jupiter's character has a similar story arch to Sam Lowry. Both are stuck in jobs they hate and dream of escape. Lowry is a low-level bureaucrat. Jupiter cleans toilets. While Brazil shows there is no escape from dehumanizing technology, Jupiter Ascending is a battle cry to the 99%. It demonizes the wealthy who live for millenia on the fuel of a humanity grown like a crop to feed their needs.

Like Brazil and Time Bandits (another of Gilliam's classics) there is a lot going on in Jupiter Ascending. Some people will say there's too much. Even though Brazil is now seen as a cult classic, many reviewers hated it when it was released, including Roger Ebert.

"The movie is awash in elaborate special effects, sensational sets, apocalyptic scenes of destruction and a general lack of discipline. It's as if Gilliam sat down and wrote out all of his fantasies, heedless of production difficulties, and then they were filmed" - Roger Ebert Brazil

Jupiter Ascending has the same hectic pacing, creating a dream-like quality to large sections of the film. Like any Gilliam film, it will require several viewings before you catch everything here.

Jupiter Ascending was all set for a 2014 release when it was suddenly and surprisingly pulled. In some ways this worked in the films benefit. A year ago most people did not know who Eddie Redmayne was. Now he's up for an Oscar (although truth be told his performance is the single worst thing about this movie).
Link: Jupiter Ascending is Not Eddie Redmayne's Norbit

Gilliam struggled to get Brazil released in the U.S. because the studio didn't like the ending or the message of the movie...so they edited them out.

"...their immediate reaction was a nervous one: 'We're not sure what we've got, so let's try to change it into something that we do understand.' And I refused to play ball with them. I said, 'Sorry, this is the film that we agreed to make.'  Terry Gilliam Interviewed About Brazil

So is Jupiter Ascending as good as Brazil. That's really impossible to say right now. Many of Gilliam's movies have been disastrous at the box office. However, time has been especially kind to them. They are movies that are impossible to forget. They linger at the back of your mind urging you to watch them over and over.

Perhaps the same will be true for the Wachowski's. Like Gilliam, they have had a rocky relationship with Hollywood. However, it's important to remember that Hollywood has a history of not supporting movies that turned out to be legends.

I'll leave you with a quote directly from Lana Wachowski herself:

“There were tons of movies that made a lot of money and were utterly and completely forgotten. Likewise, there were movies that didn’t make money that are still around and are still important and relevant.”
Link: Jupiter Ascending - What the Hell Happened?