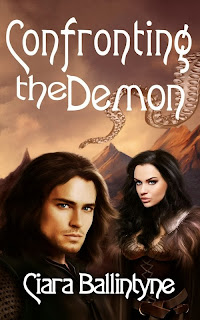 The gates to hell are thrown wide when Alloran is betrayed by his best friend, Ladanyon, and framed for forbidden magic. He is hunted by the guards and the wizards both, tormented by the gruesome murder of his friends and loved ones, and crippled by fear for the living. Now Alloran must face his demons, or damn the woman he loves.

Lots. Worldbuilding is handled perfectly giving the reader a sense of a complex, well-thought-out world. Confronting the Demon creates a world that is instantly familiar but completely unique. The magic system described simply through observations and actions rather than rambling exposition. There is just enough mystery and tension to pull the reader forward making it very difficult to stop reading at one point in the story.

The romance never devolves into cheesiness, nor does it overshadow the classic epic fantasy elements that would make Robert E. Howard happy. Dialogue and character development are handled well. Pacing it tight making this a quick, enjoyable read.

I'm not a fan of the cover. If I saw it on the shelf, I would assume it was a Harlequin Romance and not pick it up. Thankfully, I agreed to read it based on the story line. If you can get past the cover, there is a great story here that will appeal to fantasy readers.

If you like your fantasy filled with sorcery, demons, and a touch of romance, I strongly recommend Confronting the Demon by Ciara Ballintyne. There's never been a better time to get on board, either. Take part in the book blast this Saturday (Oct 12th) and pick up Confronting the Demon for only $0.99. It's well worth the price. 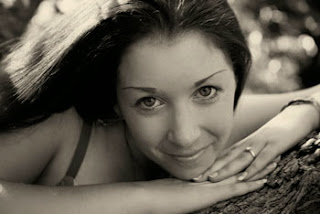 Ciara Ballintyne was born in 1981 in Sydney, Australia, where she lives with her husband, two daughters, one masochistic cat, and one cat with a god complex. She holds degrees in law and accounting, and has been a practising financial services lawyer since 2004. She is both an idealist and a cynic.She started reading epic fantasy at the age of nine, when she kidnapped Castle of Wizardry by David Eddings from her father. Another two years passed before she began her first attempts at the craft of writing. Confronting the Demon is her debut book.  She enjoys horse-riding, and speculation about taking over the world. If she could choose to be anything it would be a dragon, but instead she shares more in common with Dr. Gregory House of House. M.D.