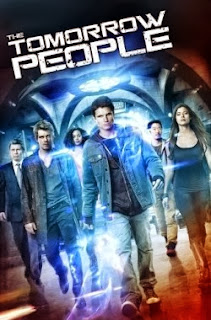 Imitation is the sincerest form of flattery. What the first episode of Tomorrow People did last night was show how the strength of the same story structure as The Matrix.

You may be asking yourself what the two things have to do with each other. Before you get in a huff and think I'm claiming Tomorrow People ripped off or stole material from the Matrix, relax. That isn't even close to what I'm saying. I'm well aware Tomorrow People is based on a much-beloved series from the 1970's. There is not an ounce of copyright infringement here. There is, however, masterful storytelling.

Let's look at the story arches side by side.

1. Start with a troubled youth (like pretty much all fiction aimed at young adults)

2. Next scene is a break in, a chase by police officers and a "jump" off the roof

3. Fighting with "agents" in the subway station

4. The first meeting with Kara and Stephen is very similar to the first time Neo and Trinity meet. At first it's not in person (either mind link or the computer). Then it's followed by a "I know why you..." speech.


5. They break into a high security building to rescue someone from the "agents".

6. Stephen and Neo stop bullets with a raised hand. In Tomorrow People and The Matrix someone says "How are you doing this?" after the hero does the impossible.

8.The "you are a plague" element. In the Matrix, it's humans while in this show it's the Tomorrow People.

9.The messiah element. Both Neo and Stephen are "the One" who will save everyone from the evil forces.

Bonus. I call this the trinity pose

So what does this say about Tomorrow People? Are the writers' lazy hacks?

Ten minutes into the premier I realize the writers brilliantly updating a tried and true mythological structure to make the series relevant for a modern audience. The series is not without its flaws (e.g. the whole "can't kill" thing is super lame and made me want to throw something at the television). However, after the way they've handled the premiere I can tell the series is in excellent hands.

I look forward to see what they do next.