Beyond the Black Sea Chapter 1 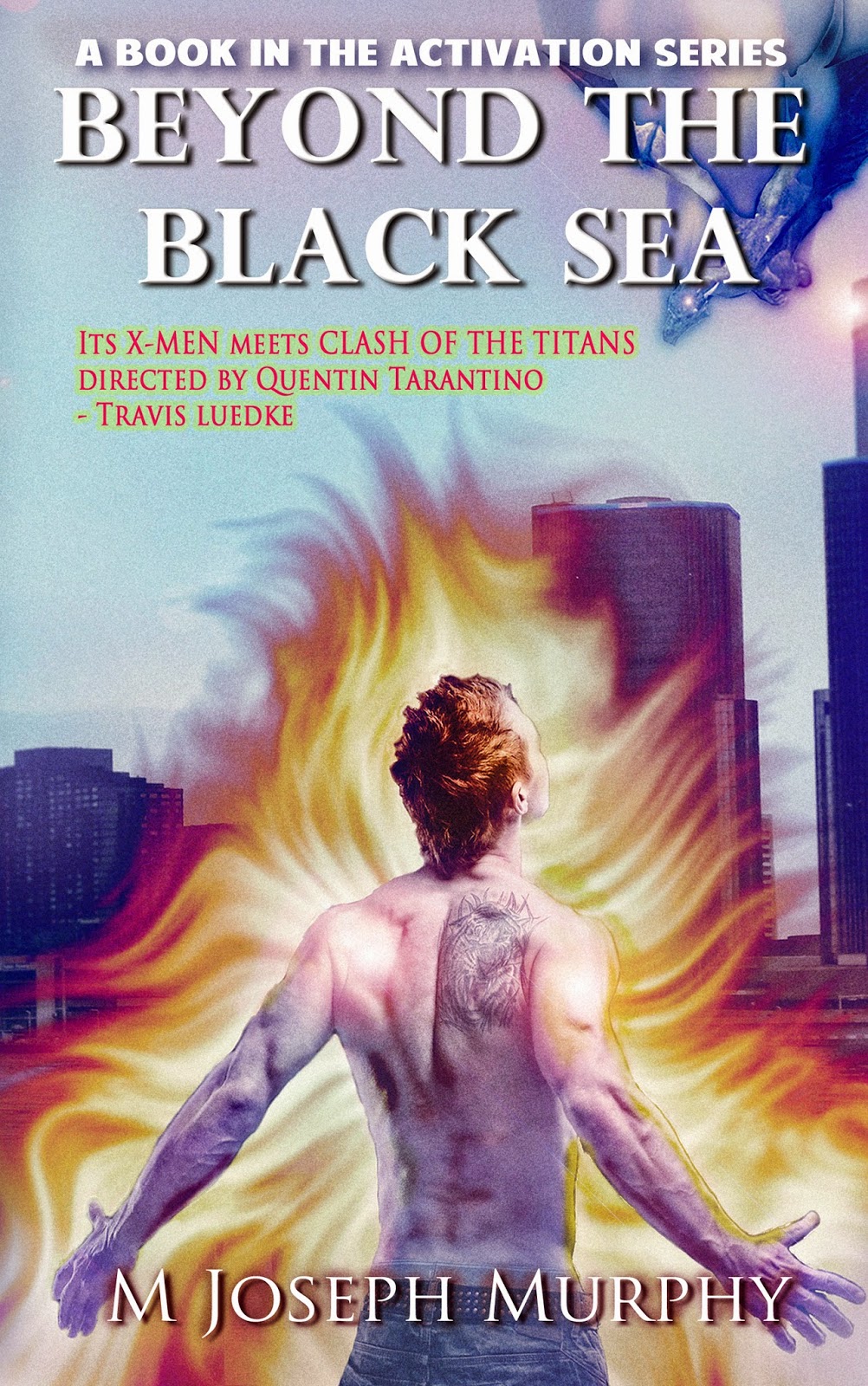 Wisdom teleported into the United Nations for his 3:00 p.m. meeting. Events around the world had escalated, necessitating the formation of a special committee on the Orphean invasion. He was 20 minutes early but there was a conversation he needed to have before the meeting started. He stepped out of his teleportation field – a circle of bright yellow light – into an executive washroom on the third floor of the Conference Building. With a wave of his hand, he closed the portal. He turned and stared intently at the large mirror above the row of sinks.

“I know you can see me.” Wisdom straightened his tie. “I have a message for you. I’m done waiting for you to make your next move. The next move is mine. And you won’t see it coming until it’s too late.”

He waited for a response. When no message reply came from the other side of the mirror, he wasn’t surprised. The Orpheans were not fond of direct confrontation.

He left the bathroom and headed towards the meeting room. Security was on high alert. Wisdom saw more armed guards than at previous meetings. It was a good sign. Maybe world leaders were starting to appreciate the risk level.

He stood outside the chamber waiting for the meeting to start. A familiar face approached him, a tall brown-haired man in a dark suit. Gabriel Wainright was the Canadian representative from Candleworks, an international agency devoted to stopping Orphean threats.

“Are we the first here?” Gabriel looked past Wisdom at the closed door to the meeting room.
“Hardly.” Wisdom pointed at the door and sighed, annoyed. “The members from the Security Council are in there having their own meeting before we enter.”

Gabriel nodded. “Typical. So much for an equal seat at the table. You’d think after what happened at the Vatican they’d be more open.”

“This IS them being more open. At least they’ve stopped ignoring the problem.”

“True.” Gabriel looked over his shoulder and waved at three women, also dressed in dark suits, who walked towards them. “Here come the other representatives. How did you manage to get through security so quickly?”

Wisdom rolled his eyes. “I don’t do security checks. They’re stupid. I could blow up this whole building if I wanted to with a blink of my eyes. I don’t need weapons.”

Several security guards nearby stood up taller, hands a little closer to their weapons.

Gabriel laughed nervously and waved at the guards. “Ixnay on the hreattnay. Or is that reathrnay?”

“You’re horrible at Pig Latin. Why do you always try to work it into a conversation?”

Gabriel shrugged. “If you can’t have fun with words, what’s the point in living?”

The meeting room door opened. Wisdom allowed the Candleworks representatives to enter before him. The seating was assigned. There was no reason to rush.

After several minutes of obligatory small talk, everyone sat and the guards closed the doors again.

At the head of the table sat Penny Dulany, the woman chosen as chair of the special committee. Wisdom had known her since she was a child. Though in her late fifties, Penny looked ten years younger. Her amazing smile could fill up any room. Today, her face was drawn and her eyes uncharacteristically dull.

“We’ve had news from China.” Penny motioned to one of the assistants at the back of the room. He proceeded to distribute manila folders to everyone around the table. “These are pictures from Beijing. The Council of Peacocks attacked a safe house where we’d found and harbored ten Anomalies. All were taken. As you can see in the photos, we paid a high cost.”

Wisdom opened his folder and flipped through several black and white photos. Each showed a body.
“How many did we lose?” This came from one of Gabriel’s counterparts at Candleworks. Her name was Dr. Melinda Uyldert from the U.K. With her short blond hair, she looked like a young Helen Mirren.

“Forty soldiers.” Penny took a deep breath. “Amazing how calling them soldiers is supposed to make it easier to lose them. Soldiers. Like they’re not people.” She pushed her shoulders back and sat up a little straighter. “Unfortunately, we have more bad news. We don’t have all the details but it appears a band of Edimmu attacked a Sasquatch settlement in Tibet.”

Wisdom groaned. “Don’t call them that. It’s a silly name.”

Penny threw her hands in the air. “Fine. Lemurians. Whatever you want to call them. Here’s the problem. Several shell-shocked survivors wandered into a tourist area. As you can imagine, their appearance started a riot. Thanks to smart phones, that led to dozens of videos uploaded to the Internet before we could rein them in.”

Mischa Fradkov, from Russia, cleared his throat. “As you Americans say, the genie is out of the bottle. We cannot put it back. We will go on TV in a few hours to acknowledge the Lemurians are real.”

“You can’t do that.” Wisdom leaned forward. “They’ll be hunted. Candleworks promised to ensure their safety in exchange for the barrier technology that blocks Orphean communications. You’re in debt to them for half the projects at the Black Pyramid.”

“We know, Wisdom.” Shaun Brennan, head of the CIA, hung his head. “The president is meeting with advisors right now on how to handle this. It can’t be stopped. Too much evidence to bury, even for us.”

Wisdom frowned. “Can’t we just kill all the witnesses?”

Penny snorted and waved her hand dismissively. “There are thousands of witnesses.”

“Since when has that stopped China?” Wisdom asked.

“I resent the accusation.” This came from the Chinese representative, Geng Huichang. “My people do not condone murder.”

Wisdom glanced around the room. “Who are you trying to fool? There are no cameras here and everyone in this room knows the Chinese are never afraid to make the hard calls.”

Fradkov motioned for Huichang to remain calm, then turned to Wisdom. “This time the hard call is choosing truth. At least a version of it. We have too many battles, Wisdom. We can’t fight another.”

“Besides,” Brennan said, “if the Council keeps on the way it has been, Sasquatch will be the least of our worries.”

Penny turned to Wisdom. “Has there been any sign of the alien with the gold ring? Defta…what’s his name?”
Wisdom smirked. “It’s Defksquar. Rhymes with Deathstar.”

“You’re such a geek.” Penny took a deep breath. “You know what I’d like? An enemy named Bob. Why do villains always have such weird names?”

Huichang raised his hand to interject. “Perhaps on his planet, we are the ones with strange names.”

“There’s been no sign of him,” Wisdom said. “I’ve been monitoring the two dimensional gates we found, the one in Windsor, Canada, and the other in Thessaloniki, Greece. Nothing. But there may be other gates. We know the Orpheans can travel through mirrors into our world. For all we know, they’re moving Defksquar between our world and his. Defksquar also hasn’t approached my student, Josh, but we have to assume he’s still important to their plans.”

Penny motioned once more for her aide. “There’s one last thing. Mr. Icke has resurfaced. He claims to have proof of the reptilian agenda. Sources tell us he has a body.”

“Damn it!” Wisdom pounded the table. “I thought I had him killed.”

Penny smiled. “My father was right about you. Is that your solution to everything? You know, Wisdom, some things cannot be solved with murder.”

Penny threw up her hands again. “You’re impossible. Perhaps it’s time we leave Mr. Icke alone. He was right, after all, about the reptilians. At least partially.”

Wisdom leaned forward. “Exactly. Why do you think I want him dead? You think people will panic over Lemurians? Just imagine if they have proof of shapeshifting reptilians. On another note, I may have some good news.”

“Formidable.” This was the representative from France, Jean-Yves Ledrec. “We could use some. Have you found this man you search for, Richard Wilkinson?”

Wisdom rubbed his forehead. “Not yet. But we have found several other senior members of the Council. They’re right here in New York, sequestered inside a mansion. It’s the first break we’ve had in months.”

“That is good news,” Penny said. “But don’t you find that strange. All known members have been on the run since the incident in Thessaloniki. Why are they here?”

Wisdom shook his head. “I don’t know. Not yet. I should have news tomorrow.” He clasped his hands together and placed them before him on the table. “You all know how much I detest politics. I’ve never wanted a seat at the table. Now, I have no choice. I know most of you don’t trust me. You’re probably right not to, but let me be very clear. The world is at a tipping point. One wrong move and it’s a disaster we won’t come back from. So I will learn what the Council of Peacocks is planning. Failure, as they say, is not an option.”