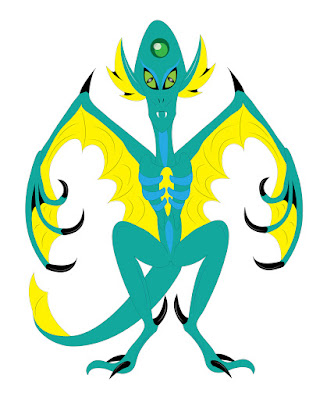 I am the first to admit I'm a tad OCD. Well, after the conversation with that psychologist a few months ago, I'm more than a tad.

So as you can imagine, I can get absolutely ridiculous when it comes to worldbuilding. In fact, what started as "I should do a little background building" quickly became "I should build my own gaming system around this universe.

So, I wrote 2 source books: one on races and characters classes (380 pages long) and one on fauna (120 pages long). On the plus side, I will never have to do it again. The universe I built is large enough that I can write in it for the rest of my career. On the downside, I probably could  have been writing more novels if I focused more on writing and less on worldbuilding.

I'm going to share a little of my worldbuilding. This is not just to show the level of my craziness. It will help fill in the gaps for those who do end up reading Council of Peacocks when it comes out.

The following image is from the Animal Planet website. 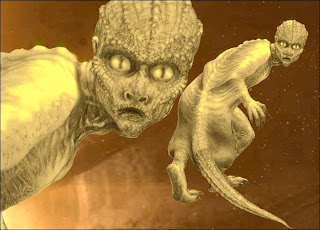 Edimmu are a race of reptilian humanoids that evolved on planet Earth alongside humans. At one time they were worshiped as creatures of divinity. Those with wings are the foundation of most angel myths on the planet. Long ago, religion and public opinion change. They were no longer seen as angels but demonic creatures.  They were forced to hide in vast underground caverns to avoid extinction.  Unfortunately this move made them targets for the Orpheans who were also living underground. Many Edimmu were slaughtered and the rest were turned into slaves.  When the Orpheans were exiled to the Axeinus, the once technologically advanced race of Edimmu dug deeper into the earth and further and further away from human interaction.

Recently they have returned to the surface. Now they act as operatives for the Council of Peacocks and the agents of Orpheans who are active on Earth.

They tend to be hairless beings with skin similar to snakes. Some of them (01-40) are born with reptilian wings and are capable of flight (max speed 100 mph).  Others (41-90) are born with an ability to manipulate light and shadows. If they are capable of generate shadows they can travel between dimensions and across distances just like the Field Bending ability Shadow Travel.  Only a rare few (91-00) possess both these abilities.

Edimmu are capable of altering their appearance by manipulating the perception fields of those around them. This functions like a holographic illusion rather than true shape shifting. This ability can be used to look human (80% +1% per level) or like a specific person (50% +2% per level)